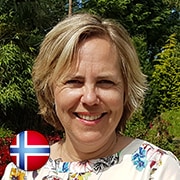 For four years I went to my doctor and asked for full sick leave. I work as a teacher, and I love my job. But at that moment I was so exhausted when I came back from work, that it was not possible to keep on. I could not do anything else other than work. I have two children and I was so frustrated that I could not be the kind of mother I wished to be. I always felt that I was too tired to do things with them.

In 2007 I was diagnosed with spondylitis/rheumatism. My son was then 7 months, and I had so much inflammation that I could not lift my son up to the breast to feed him. I had pain in a lot of joints, and I could hardly move. With drugs and exercise I became a bit better physically, but the fatigue was crippling.

I could only do one thing per day. If I went to work a few hours I had to rest for the rest of the day. I still had periods with a lot of inflammation and pain, and I was really stressed. I often saw problems instead of solutions and got stuck in negative thoughts. With so much pain and fatigue I became afraid of the future.

When I came to my doctor he started telling me about Russell Stubbs and that he had a lot of  experience and good results with helping fatigue patients. He gave me the internet address to his website and I went home reading about his approach to Chronic Fatigue Recovery. I concluded: This is a person who knows what fatigue is, no doubt about that, but could it be possible that it could help me?

Could I trust a British coach better than the rheumatism hospital? The only advice I got from the specialist in the rheumatism hospital was more exercising and talk to a psychologist. That I already had tried for 4 years and I was still getting more and more fatigued. They also told me that there was really nothing else to do with the fatigue. Other than to live with it.

I guess if it hadn’t been from the advice from my doctor, I never would have dared to take the step. I decided to make a call and talk to Russell Stubbs. Maybe I could give this a try, but I thought it had to be in my own language (Norwegian). I felt my English was not good enough to participate in a programme. I found out that this wasn’t the case.

Nevertheless I felt deep inside me that this man and his treatment I had to try, and Russell was so calm and knowledgeable, that I chose to give it a try. Of course I was scared, terrified talking English and that the programme that he offered could possibly not work.

I took part in the Chronic Fatigue Recovery programme and everything went well. Russell’s English was always easy to understand. The techniques were simple to learn and use. But these simple methods gave me a new life. This was a completely different approach, almost the opposite to what the psychologist had advised me to do.

This was more like a recipe – how exactly to deal with the fatigue, symptoms, pain etc. After taking part in the programme the energy was back and I had the tools to deal with my situation. I feel that Russell taught me to live my life in a completely different way. He could always see what choices were the best for me.

The psychologist had often left the decision and problem solving to my head, and I really never knew what was the best for me in my situation. Russell taught me about myself and my destructive patterns, how to recognise them and how, with practice I could make new patterns. My view on people and the world is a lot more positive now. I understand people’s behaviour in another way, and I’ve learned to make choices that are good for me.

I always found the one-to-one sessions with Russell helpful and it felt so good to have him to talk with when difficulties arose. Russell Stubbs feels like a helping friend. He is never in a hurry, and he always takes the time that is needed. He is humorous, wise and supporting. In the beginning I was worried about working with someone over a distance, but it is really perfect. Then I can sit in my own home when it suits me.

Initially I approached Russell for help with the Fatigue, but as we worked together over time, my spondylitis symptoms (pain and inflammation) also gradually improved and I now have much longer periods without such suffering. Russell’s methods have made a massive difference for me, when previously there were times when I could hardly walk due to the inflammation and pain I was experiencing.

That improvement has also lifted an emotional weight from me, as I had previously been told by the specialist in the rheumatism hospital that there really wasn’t anything I could do with the fatigue symptoms, so all I had feared and expected was that they would only get worse.

I guess for anyone reading this, they could think that this is not for real. I was very skeptical also, but this is the best choice I have ever made. I can honestly say that I and my family owe Russell  everything. It is through working with him that I can now go to my sons soccer game after work, or go shopping or do anything else I want. I also feel more calm and happy inside of me.

So if you consider to try this treatment, I would say that this choice will give you a better life. I always say that everyone should have a Russell in their life, even the healthy ones, because with his guidance and the tools he teaches the emotional and physical life becomes better in every way.

Elisabeth’s journey started with a conversation, apply here for your Free Strategy Session