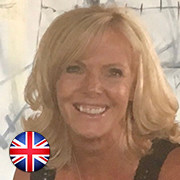 I had ME/Fibromyalgia for the last seven years. When it started I was working really hard in a new job, doing ridiculously long hours and was really stressed. I also had a busy social life, was helping a couple of other people out, as well as looking after my own house and garden; and somehow amongst doing all that I was also fitting in quite strenuous gym sessions.  When I look back, I can’t believe I managed to carry on as long as I did!

It took a couple of years to get a diagnosis. I had taken three months off work with what I thought was burn out although I did have neck and back pain but I thought that was from lugging my laptop and case around on the trains whilst travelling for work. I went back before I was properly better and I got a mild skin cancer for which the specialist gave me some cream to ‘eat’ the cancer.

It had a very good effect on the cancer but unfortunately within three weeks I was literally on my hands and knees and unable to work again but this time everything was so much worse (I subsequently read that if you had immune problems you shouldn’t use the cream) so I was then off work for over six months.

I still had the extreme fatigue and neck/back pain but the brain fog had now got so bad that I felt like the lights had gone out – I couldn’t send a text or even read a line in a book; I continued to have awful migraines; insomnia – I was exhausted but just lay awake all night; constipation and digestive issues; chemical sensitivities and I couldn’t stand noise or bright light so I couldn’t watch TV or use the computer; and my face and body kept swelling up to gross proportions.

I was told that the pain was chronic and would never go away and I would have to get used to it so was referred to a Pain Management Clinic, then eventually after that I was referred to the ME Clinic which eventually enabled me to get back to work again but I was still struggling and as soon as work put me back into a similar role and I got on my first train for a long journey, it was as if a switch was flipped in my brain and the extreme fatigue and pain kicked in; I struggled to keep my eyes from closing in the meeting and couldn’t really grasp what was being discussed.

The journey home was horrendous, I was so exhausted I couldn’t function, my stomach blew up and hurt so much that I didn’t know what to do with myself and the pain was almost unbearable. I couldn’t work again and my symptoms were even more severe than before. I couldn’t even brush my hair, clothes felt like they weighed a ton and I couldn’t manage to take a shower as the warm water would make me pass out and I had a few anaphylactic shocks which were scary.

Throughout this time I was spending a fortune on chiropractors, physiotherapy and osteopathy. I was trying anything and everything. Luckily my osteopath suggested I try a Perrin Practitioner (they specialise in ME and lymphatic drainage) and she mentioned that out of all the people with ME she had worked with, she only knew one who had fully recovered and that this person had worked with Russell Stubbs.

Unfortunately it took me another two years before I contacted Russell. In the meantime, through her advice and lots of my own research I had changed my diet, done a lot of detoxing and had made great progress. So much so that I could now take short walks with the dog and I could manage to work from home doing a less responsible role. However, I couldn’t manage to do anything other than work. My elderly mother was doing my supermarket shop for me and I still couldn’t meet friends or socialise at all.
.
One day I was having a particularly bad day and was worrying because my 82 year old mum was getting re-married in a few months’ time and I was scared that I wouldn’t be able to manage the church and reception and also, as the wedding was the week before Christmas, how I would then be able to cope with Christmas – as I knew I would be ill following the wedding. I remembered Russell’s name and decided to google him. I found his website really interesting and clicked the link to download the free information and also applied to have the free introductory session.

He quickly responded to set up the initial call and I immediately found him very easy to talk to and what he said made sense. At last I was speaking to someone who totally understood. His reassurance made me feel that at last someone was on my side and someone who could also help! He asked me what my short term goals were and I explained I had my Mum’s wedding in 3 months and he thought there would be a good chance that I’d be able to enjoy the day, AND I DID!!  I couldn’t believe it, there was no way that would have happened without him.

Whilst working with Russell I found the whole ME/CFS Recovery Programme was run very professionally, not just the individual sessions with Russell but also the modules, videos and print-outs you receive.

Russell was so patient, always very encouraging and his explanations so easy to understand. The tools and techniques definitely work and as my system is still slightly sensitive I still need to be consistent in my practice and if I am, I feel great all the time. I now have plenty energy and actually have a life again, one which I think is now in many ways so much better than before.

Russell is very genuine and caring. He has helped me to gain more confidence in myself as a person and as well as being healthier, I think I will also make much better decisions with my life going forward. I have already made some life changes which make me very happy – I can’t stop smiling because I’ve got rid of this horrible disability – I’m much calmer, I worry far less and that horrible anxious feeling has gone.

Working with Russell has enabled me to fit the last pieces of the jigsaw into place (there was definitely more than just one) and I am quite certain that without Russell and his tools and techniques I would never have got my health back. I am so grateful to him and can’t thank him enough.

If you are reading these testimonials and wondering whether you should contact Russell I really would encourage you to. Without him, I would still be embroiled in that horrible illness, worrying about my future.

Julie’s journey started with a conversation, apply here for your Free Strategy Session